The UFC, CBD Oil And Cannabis: A Budding Relationship

At a recent UFC open workout, the most talked about part of the session wasn’t the actual workout, but rather the behaviour of Nate Diaz who openly lit up a joint at the workout. Rather than the workout that his fans were expecting, he took a few pulls of cannabis, passed it to his videographer, who then passed it to fans in the front row.

This unexpected start to the UFC-sponsored workout was later explained when Diaz clarified that he was smoking a CBD joint – a cannabinoid extracted from cannabis that is not psychoactive, and does not cause a high.

Along with his brother, Nick Dias, Nate has been an open proponent for using cannabis in MMA but in order to stay compliant with the UFC’s drug policy, seems to have made the switch to CBD which was officially removed from the WADA (World Anti-Doping Agency) banned list in 2018.

Drug Testing and What it Means for Cannabis Smokers

Marijuana consumption is prohibited in competition, but drug tests that the athletes submit to only look for THC, no other cannabinoids. Effectively, this means that athletes can’t smoke marijuana, but smoking CBD, with its extremely low levels of THC, is fine. For this reason, UFC athletes may continue to smoke cannabis outside of competition, but many are making the switch to CBD to ensure that they are able to pass drug tests.

It’s important to note the cannabis is only prohibited by the UFC in competition. This is from noon on weigh-in day (usually the day before the fight) to immediately after the bout ends. That is the only time that marijuana will be tested for. But in order for athletes to fill confident of passing the drug test, they need to discontinue the use of marijuana as much as a month before the bout.

Why Marijuana is Banned for Use by UFC Athletes

The primary reason that cannabis usage remains banned is because it can enhance performance. It’s widely believed that marijuana impairs physical performance (including exercise), but it depends on the athlete and the sport discipline. In addition to contributing to enhanced performance, marijuana use has a number of health risks, and it violates the spirit of the sport. Risks including having a negative impact on heart, lung, and mental health. And, because marijuana is illegal in most countries, the use or abuse of the substance does not exhibit the ethics or moral judgement of the sport.

The Benefits of Cannabis for UFC Fighters in Training

While marijuana use decreases hand-eye coordination and distorts spatial perception, it does have other positive effects for UFC athletes, marijuana can:

CBD and the UFC’s Involvement

CBD, on the other hand, is completely legal, and the UFC has made positive steps towards investigating its potential benefits for UFC athletes. The organisation recently signed a multi-million dollar partnership deal with Aurora Cannabis, testing the use of CBD at the UFC Performance Institute in Las Vegas with volunteer athletes. The mixed martial arts organisation will conduct clinical trials and research into hemp-based CBD looking at fight performance and post-workout and post-fight recovery.

Working with Aurora, the UFC aims to make significant advances in clinical research and testing to investigate the relationship between CBD (derived from hemp) and athlete wellness and post-fight recovery. The first stage of their eight-year partnership is already underway, and from the investment that the UFC is making, it’s clear that they strongly believe that CBD is the best way to support the health and wellness of their athletes.

The UFC’s partnership announcement comes on the back of the launch of Nick and Nate Diaz’s plant-based nutrition company that offers CBD-infused products. Game Up Nutrition is designed to offer effective herbal alternatives for nutritional goals and the treatment of ailments. These vegan-friendly products use only the highest quality organic ingredients, sustainably produced in the Us.

Other MMA athletes are signing up with CBD sponsors to promote their products including UFC superstars such as Daniel Cormier and Stipe Miocic.

The switch from cannabis to CBD was lead by the Diaz brothers as much as 3 years ago, but more and more, athletes are working with CBD sponsors. The move by the UFC, in particular, is interesting as it demonstrates their support for the cannabinoid and the potential that it has for athletes. 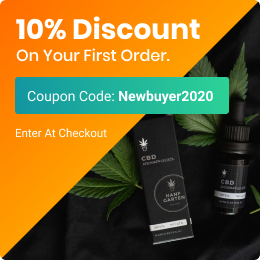